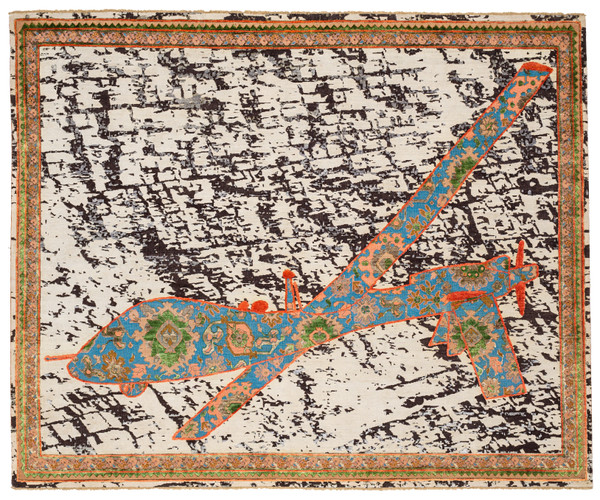 Rugs are like a mirror of their time. They have always reflected the lived realities of the people who design them. Jan Kath sees himself as continuing this tradition with his work for the RUG BOMBS exhibition.

The son of a german rug merchant – who now lives in Thailand – grew up on rugs. He visited the most important trading centers in the Near East with his father at an early age and familiarized himself with the craft at the best-known knotting workshops.

Rugs are his canvas and wool his paint, says Kath. However, the designs are created on a computer first and then sent to ateliers in Kathmandu and Agra. The weavers there use their enormous skill for the craft to turn the many millions of pixels in the digital template into woolen knots, and the designs into a look-and-feel experience.

The work by Jan Kath, first presented at the Brüderkirche church in Kassel, focuses on the theme of violence. Warships, warplanes, drones, people fleeing – RUG BOMBS uses portrayals that are etched into our collective memories, shows abstract scenes of war, and incorporates stylized photographs of cities in battle. Featuring clear links to pop art, Kath dissects familiar images. He cuts out, frames, changes context, collages, and in doing so creates new levels of viewing that are occasionally ambivalent.

Overfilled rubber dinghies are displayed hazily on their crossing of the Mediterranean, with a lemon-yellow moon shining over everything. The artist simultaneously uses historical photographs of a caravan of German refugees fleeing across the frozen inlet of the Baltic Sea after losing the war in 1945.

In his work, Jan Kath expresses his helplessness and desperation in regard to the news and images that flood us every day. At the same time, he also questions the origins of violence.

Fill in the form below so that we can contact you with more information about this work.